'A Disarray Of Palaeoart' - A New Book By Me!


Every November, doodlers from across the three double-ues go crazy producing palaeo-themed illustrations for DrawDinovember, which is, in effect, the palaeo world's very own Inktober. For those not in the know, Inktober is a month-long daily-doodle event. Doodlers upload their ink artwork to the internet, complete with "#inktober". DrawDinovember is similar, but requires something a little more dinosaurian. Or just palaeontological.

It's pretty loose, and no one's standing guard. Overseeing it is its creator, Brynn Metheney, who lurves her dinosaurs – but she's groovy about it all, and offers hearts and retweets via the official Twitter account, @DrawDinovember. (By the way, you look at what she gets up to here!)

Anyways, I did do doodles last October, though it has to be said that my Inktober offerings—it's starting to sound like some Romano-British pagan cult—were not all of a palaeontological flavour. In fact, most of them were shitty doodles of Daleks and spaceships because, for some reason, I was nine years old for much of October. (It happens, sometimes.) But I fared much better for November, and I ended up with a shedload of doodles of various styles and qualities.

Hmm... What to do with all those sketches.

So, a few of you will be aware that I recently loosed A Disarray Of Palaeoart, so named because there's no particular thread tying everything together. It kicks off with a great foreword from those wonderful bods at Love In The Time Of Chasmosaurs (which was exciting for me, and I'm still buzzing off it), and then there's a false start with a non-palaeo image (but who doesn't like a hornbill?). There's a pretty eclectic mix of palaeo 'strations and styles, with each image accompanied by a chunk of text, ranging from some deep quasi-scientific musings to early-20th-century-style nonsense poetry. ('Nonsense poetry' is a term that bad poets hide behind.)

The poetry was inspired by the 1913 book, The Google Book, by Vincent Cartwright Vickers, a renowned economist and Fellow of the Royal Zoological Society. Vickers was a keen naturalist and it's clear that if he leaned in any particular direction, it was one that was feathered. To summarise, The Google Book is a collection of ink-and-watercolour illustrations of fictitious birds in a fictitious land, complete with verses and descriptions. It's wonderfully whimsical, but its 1913 release was extremely limited, apparently to only a hundred or so copies. Fortunately, in 1979, Oxford University Press published a new edition, and my parents had the good sense to snag a copy.

So that's The Google Book, and in terms of inspiration, only accounts for about 6 of the 114 pages. But it's a brilliant little book and it's worth a shout-out. There aren't loads of them out there, but eBay typically has a couple from time-to-time.

The rest of the book is harder to characterise, basically because it's all over the place like a toddler's breakfast. Don't worry – it's meant to be. It covers pop culture, local history, made up folklore, and straight and speculative palaeontology. Whatever people make of it, I hope that they see it as fun. As one of my day-job customers commented yesterday (in a thick Lancashire accent), "I'm not gonna lie, I didn't understand all of it – but it's got humour in it!" 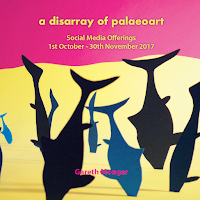 The text-to-imagery ratio is probably around 50:50. It's all very well shovelling a bunch of doodles into a book, but an image-only affair might come across as lightweight and a little self-absorbed. So I wrote a load of stuff in a style not-too-dissimilar to this blog. And when asked about 'technical speak' by that gentleman mentioned earlier, I explained that if I worried too much about writing for any particular group, I'd probably wind up dumbing it down, and no one wants that. I'm not an academic, so I fully expect that academics will get that if they read this. But kids are clever, and if they meet a word or phrase which doesn't make sense, they know how to find out what it means. And if I've made a boo-boo, kids will be the first to let me know. And that will be the ultimate compliment.


A Disarray Of Palaeoart is available to buy here, priced £10 plus carriage.
Posted by gaffamondo at 13:09