Prehistoric Life, As Rendered In Lego


An introduction to Lego might seem totally unnecessary, but in the event that this blog outlives the famous brick system, here's a tweet's worth of description for future readers:

@Lego is a line of plastic construction #toys consisting of colourful interlocking plastic bricks, gears, figurines and various other parts.

There you go. A description so concise, even a world leader couldn't fail to stick with it to the end. But Lego is more than that. Lego is manufactured by real Vikings and for a good few years it barely sported any English on its packaging. Even so, it's taken a surprisingly strong hold in English-speaking countries, eventually shedding the remnants of its continental look, and making every third set a Disney-controlled-Hollywood-movie tie-in (and then there's all the DC stuff). Old duffers like me yearn for a time when there were fewer unique pieces, but you can't fight evolution, and Lego doesn't fight market changes.

Luckily, Lego whizz, Warren Elsmore, was on hand to remind us that Lego can still be more than just Star Wars and lazy, gender-specific faux pas.

Dinosaurs: The Universal Language For Cool

Before a chance visit to Preston's Harris Museum & Art Gallery last week, I'd not heard of Warren Elsmore (he tweets here). Everything I now know has been gleaned from the web, and it's clear that he's not built (BUILT!) his Lego career just so he can fill the world with dinosaurs. And that's okay. Dinosaurs aren't everybody's cup of stuff, and making a living out of them is hard work. Warren has turned his engineery talents to several disparate areas, which are all incredible and covered in detail at his site, but what got my palaeosenses tingling is his current touring exhibition, 'Brick Dinos'.

Now, it's almost a given that something with dinosaur in the title, and intended for general consumption, will actually feature a fairly broad array of dinosaur and non-dinosaur palaeontological critters. Practically nothing else rolls off the tongue, and as any marketing consultant will tell you, buzz words work (even if they make experts twitch).


Warren's 'palaeoLego' displays themselves were placed within a couple of decent-sized galleries, and could be divided, broadly, into two types. A dozen or more glass cases held dioramas and replica specimens, such as plant and ammonite fossils. The dioramas resembled regular kits in terms of scale. I could almost have imagined that these were off-the-shelf Lego kits - and that's not to suggest that there was anything run-of-the-mill about them, simply that were very-well conceived and honestly looked as if Lego's designers had signed them off. And that should come as no surprise, since Lego bricks is what Warren's famous for.


Naturally, there's a resolution issue here. There's a bottom end to the scale, and the only real way to introduce palaeontologist-pleasing detail is to go big. You don't really get to include integumentary structures such as feathers when you're working in Lego. That doesn't mean Warren doesn't try. His ornithomimid - I think it was Struthiomimus - certainly had some attractive downy fluff cascading down its sides.


As this was a flying visit and I didn't know the exhibition was happening, I didn't take many notes, so I honestly don't recall whether this was Struthiomimus or Gallimimus. And that illustrates the resolution issue. The level of detail attainable at this size is limited, so this could be any ornithomimid. On the other hand, this isn't an exercise in scientific accuracy, so who cares? And it is nice to see a non-avian theropod, as part of a pop culture exhibit, adorned with feathers.

(Speaking of feathers, there was also an Archaeopteryx, but it wasn't very convincing, even bearing in mind it was made in Lego - so I didn't bother to photograph it. Again, it's a resolution issue. Bricks are just too, well, bricky to convincingly depict an animal famous for its avian-esque qualities. Also, it seemed to have a short tail.)


It would be weird if there wasn't a hulking great Tyrannosaurus in this display, so it was no great surprise to find one skulking around in the Lego scrubland of one of the glass cases. This one raised smiles with its bloodied kill's remains strewn across the ground. Oh, and look those manus! No bunny hands here! Hats off to them for getting that right.


It's worth drawing attention to the landscapes in Warren's sets. There's no Cretaceous hothouse tropiness going on. No baked deserts with an obligatory backdrop of lava-spewing volcanoes. The leaflet boasts that Warren worked closely with a palaeontologist, and that's evident. These are Lego renderings of living animals and it shows. These are not '60s caricatures of cold-blooded, tail-dragging lizards, smashing their heads into rocks and fighting each other because they don't know how to do anything else. I walked in vaguely curious, but ultimately not expecting much, and I came out wanting to blog about it.


The second type of display, after the dioramas, is the full-scale sculpture. Understandably, there weren't as many of these, and how do you decide which dinosaur to tackle? And, importantly, where do you draw the line when it comes to size? Cleverly, a large diorama into which one places a medium-sized dinosaur is still an imposing sculpture! Masiakasaurus is an interesting theropod from Madagascar with weird, sticky-outy teeth which suggest that it may have gone after fish and other small animals. 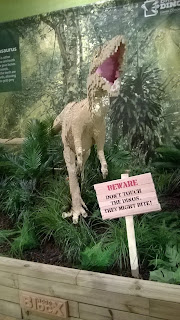 Most palaeo workers agree that too small a selection of palaeontological animals get too big a share of the attention. That most of those animals are dinosaurs is also a massive bugbear for palaeo workers. Dinosaurs are the 1%. If you asked a hundred different palaeontologists to nominate an extinct animal to feature in this diorama, you'd receive a thousand different nominations - and you might get a dinosaur among the mammal teeth. But this isn't SVPCA, it's the Harris in Preston, and its target audience includes an enormous number of kids, all desperate to rattle off every dinosaur name they know in front of proud parents.

Despite this, it's still fun to see something a little more 'out there' than the usual 'T-REX', or mis-scaled Velociraptor, even if it is another theropod. Masiakasaurus isn't your usual theropod, at least not at the sharp end, and it's nice to see that extra effort went into avoiding a dinosaurian cliche.

Given that this was the only full-size Lego model of a theropod in the display, I would have loved to have seen an attempt to add some sort of feathery coat, perhaps not fully-veined feathers given its position on the theropod family tree relative to those more closely related to birds, but some hint. Or maybe, given that Warren clearly isn't adverse to the idea of feathered dinosaurs, his consultant nudged him away from that headache.


Again, I feel like I'm nitpicking. An important aspect to displaying dinosaurs is conveying their size - especially the larger examples - and this is something you don't necessarily get from their skeletons, since they are reduced to hollow, lightweight frameworks, with museum lighting reaching through a complex of negative space. A solid, fleshed reconstruction takes us that bit further, and we can appreciate the mass of an animal, even if it is demonstrated in Lego, minus a bit of fluff.

During my short visit, I saw children awed, and occasionally scared, by Warren's incredible models. Interactive displays and activities enabled visitors to fully engage, and an art competition will extend the enjoyment that bit longer for one lucky visitor. If you're in the Northwest, you've got 'til September 17th (2017) to see this exhibition, after which it goes extinct, though perhaps not forever. For more information, go here or here.
Posted by gaffamondo at 17:45